Reflecting on 20 Years of Construction at LACF: Christ is the Cornerstone 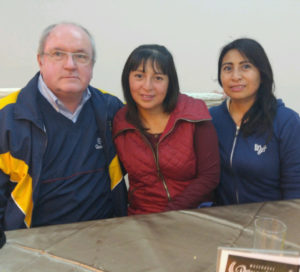 Ralph with a young lady he sponsored as a child, Lucy, and her mother

What was once a barren plot of land covered with trash is now a flourishing oasis and a shining beacon in an area that needs the light of Christ. I returned home on October 3, 2017 after spending ten days with Ken and his family at the Roma Lee Courvisier School.  For the past seven years, a variety of circumstances did not afford me the opportunity to visit the work LACF is doing at the school in Reque, Peru and surrounding areas. Having been there shortly after the foundation was poured for the first building and having been a member of several work camps that have helped construct several of the buildings, it was very difficult for me to have had such an extended absence from the work.

I was thrilled to see the construction completed on the Library and the two new classrooms that are under construction; one of which I painted so the windows and door could be installed.

The congregation that meets within the compound walls continues to thrive and minister to those around them. Vast improvements have been made to the physical structure of the church building since I was there last. The concrete walls and new trussed roof have made the building safer and very conducive for worship. The improvement to the church building in Villa Milagro has enabled the congregation there to better serve the people in their community. The children who attend the school seemed as excited as ever and glad to be part of the educational program offered by LACF.  As they prepare to close out another school year I would challenge each of you to continue praying for those who will graduate and move forward with their lives as well as those who will continue their educational journey at the school.

Students in the schoolyard

There have been and will continue to be financial and other challenges that the school will face, but prayer and your support will enable them to meet those challenges. I also urge you to continue your support either through the sponsoring of one or more children or just contributing to the general fund at the school.

I am reminded of the words the Apostle Paul wrote to the Church at Ephesus (Ephesians 2:20) concerning who they were as part of the household of God. He told them that they were built upon the foundation of the apostles and prophets with Jesus Christ being the chief cornerstone of the building. He went on to add that all of them growing together would produce the holy temple in the Lord. That is how I view the work of LACF in Peru. There are those who, in the name of Jesus, laid both the spiritual and  literal foundation for the work there and many over the past twenty years have continued to build the physical structures so Ken and those who work with him can do the spiritual work needed in the lives of the children who attend the school, their parents, and people in the areas that surround the school.